If you’ve ever ventured far enough into the Northern kingdom (as brave young men and women often do when they reach a certain age and thirst for adventure), you might very well have learned a game peculiar to the Northmen that they call “Hey Hey Who’s At My Door?” For the uninitiated, the game consists of one “Eat-Wangie” who goes from house to house knocking on their neighbors’ doors and saying, “Hey old-ma’, what kind of pie ya gots?” in some sort of clever voice. Whoever answers the door is known as the “Wang-Baker” and must answer, “What kind of pie wish ye _____?” (inserting the person’s name at the end). If the Wang-Baker guesses the person’s name incorrectly, they must immediately bake them whatever kind of pie they wish regardless of how extravagant or expensive the ingredients. On the other hand, if the Eat-Wangie fails to fool their host and their name is guessed correctly, the Wang-Baker is allowed to strike them on the head with a large wooden mallet that is kept by the door expressly for this purpose. This explains why so many people from the North have both flat foreheads and early-onset diabetes.

You’re probably wondering how such a fun game was invented, and as you’d expect, a wizard was involved. Back in those days, wizards would wander around in the North stopping by peoples’ homes and eating as much as they wanted in exchange for casting some minor spells like Mage Hand or Ghost Cat* (which is a spell that kills your cat and immediately brings it back as a ghost so you don’t have to clean its litter box anymore).

* There’s been a great deal of debate about the usefulness of this spell. Some people say that since you can no longer pet the cat and it can no longer catch mice, there seems to be little point in having it around as a ghost. Other people argue that a ghostly cat will still scare the bejebus out of mice (and really pretty much anyone/thing). Furthermore, the cat does still produce ghost poops which, while undetectable to the eyes and nose of the living, will ward off any denizens of the astral plane as the phantom feces quickly piles up and disgusts the hell out of them.

The citizens of the North, being a largely practical people, would have preferred to hang onto their foodstuffs, but as it’s both socially awkward and dangerous to one’s health to refuse a wizard’s request, they had little choice but to go along with what was a pretty raw deal.

That was until one day a wizard named Stratonice ventured North looking for the tasty crabs that she heard grew in their ice-filled, briney seas. Having wandered through the wilderness for some time, she came across a small village and thought she might warm her bones by the fire of one of the peasants and ask if they knew of any good fishing spots. Upon knocking on the first promising-looking door, Stratonice was greeted by a rather exasperated-looking woman and her three small children.

“Oh great,” said the woman. “Look, we don’t have much left and the cat’s already dead. Take what you want though, I guess. Maybe you could cast Feather Fall on young Thomas here? He’s always falling down, and he’s going through the knees of his pants faster than I can mend them.”

“Do what now?” asked Stratonice.

The woman explained the whole situation to her and said the village was practically out of food and that at this point everyone had Minor Illusion cast on them, which is why they all seemed to be having a good hair day.

“This is totally typical,” explained Stratonice, who was often embarrassed by the crass behavior of her fellow wizards. “Look, the only way to deal with these a-wipes is to make them think they’re competing in some sort of contest with other wizards. Tell them that the last wizard who came through bet he could guess your name in only three tries or he would leave without eating a thing. I’m guessing any wizard who comes along will feel compelled to do it in one try, and as soon as they get it wrong, they’ll be too proud to eat a bite.”

“But won’t any wizard just be able to guess my name?” asked the woman. “I mean they are wizards after all.”

“Don’t worry about that,” explained Stratonice. “They’re all going to use the same basic mind reading spell to figure out your name. As soon they look you in the eye, just think ‘Cindy’ or whatever real quick, and they’ll get it wrong. Most wizards have, like, a 17 in intelligence but an 18 in laziness.”

“But my name is Cindy!” said the peasant.

“Oh… well in that case you owe me dinner,” said Stratonice. “Anything but lasagna is fine. I can’t stand lasagna.”

Anyway, the game worked like a charm, and pretty soon wizards just stopped coming around because they hated losing and also they were worried something in the Northern air was interfering with their mind reading powers.

The weird thing is that the peasants kind of started missing the game, so they made up their own version of it. The part with the mallet is totally unnecessary, but they’re a pretty rowdy group up there and that kind of thing is par for the course.

As for Stratonice, she did end up finding a good crab-fishing spot and, in fact, settled down in the North for a long time before a very weird set of circumstances caused her to move to another dimension. That’s a whole other story though. 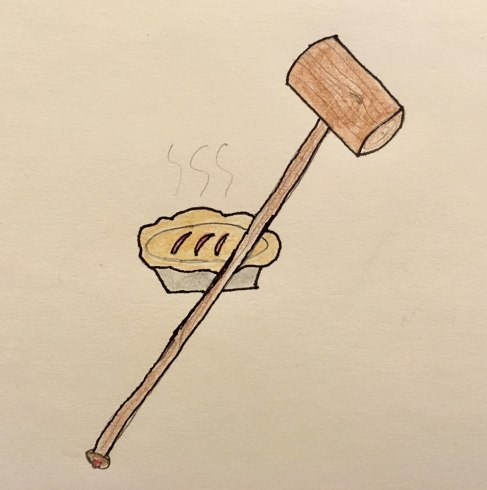