Old Uncle Ratticus lived out in the woods drinking poison and cursing at thin air. People called him old because they had no idea how old he was, uncle because he seemed like a mean drunk uncle, and Ratticus because he was a four-foot-tall rat.

Every now and again some poor tourist would accidentally wander by his cabin and Ratticus would scream gibberish at them before throwing them off a cliff. The locals didn’t really care that much because they knew to just avoid that part of the forest, but eventually someone with money complained to someone with authority… you know how it goes.

Of course the mayor ended up summoning a wizard, like people always do when they’re out of ideas and feeling lazy. The wizard who showed up was this guy Kirkergard who was bored that day and thought Ratticus sounded like a hoot.

When Kirkergard arrived at the old ramshackle cabin he decided to just knock on the door and see what would happen. What happened was that the door fell off the hinges and Kirkergard went inside.

“Hello?” he called out as his eyes adjusted to the dim, dust-filled light.

Immediately a jug of poison flew across the room, narrowly missing his head and smashing to bits on the wall behind him.

“Filthy Greaseball!” screamed a rat-man as it flew across the room and seized Kirkergard by the arms, “I’ll spit up your father’s taint and eat your dirt cabbage!”

Before he could think how to react, Kirkergard found himself hurled through the nearest window. Luckily most of the glass was already broken out, but unluckily Ratticus was already outside kicking him before he could even dust himself off.

He wondered if Ratticus meant there was cow poop in his ass, or if he was saying that cows somehow pooped inside of his ass, but he didn’t get to think about it much because the rat-man had now picked him up with its stick-like arms and was running through the forest with Kirkergard held above his head.

“Hold on now!” said the wizard, struggling to free himself. He tried desperately to move his arms enough to cast a spell, but the rat’s grip was stronger than a steel vice and they were moving at an incredible speed. The woods became a green blur and vines slapped at Kirkergard’s face.

“Stick a ham in your sister’s beef oven and wink at a spider, lip lover!” Ratticus shrieked as the wind whistled around them. He jumped over boulders and bounded across streams. Never once did he slow his pace or his endless stream of curses, as they covered miles of forest in mere seconds.

Before he knew what was happening Kirkergard found himself looking down from a high cliff in a part of the forest he’d never seen before. “Wait!” He yelled, but Ratticus had already tossed him over before the word had left his mouth.

The rodent’s head seemed to shrink as Kirkergard fell through the air. “Sit on a knobby thing, pissbaby!” screamed Ratticus before disappearing back into the woods.

Those were very nearly the last words Kirkergard ever heard. Only his quick reflexes allowed him to cast FeatherFall a mere three feet before hitting the ground.

“Well,” said Kirkergard standing up and dusting himself off “clearly he’s not one to listen to reason.”

It was almost nightfall by the time Kirkergard found his way back to Ratticus’s lair. He decided to take no chances this time and stopped a full hundred yards from the front door of the cabin. Given everything else he had learned, he’d be surprised if Ratticus didn’t also have excellent hearing.

“Hey lip lover!” He yelled, using his favorite of the rat’s insults “Come out here and suck my salty dick!”

Ratticus crashed through the forest and was nearly on top of him by the time Kirkergard was able to activate his ring of entrapment. A cone of ruby-red light seemed to dissolve the rat before sucking it down into the glowing gem. The ring rattled loudly, like a pebble bouncing around in a jar, and for a second the wizard was worried it would crack, but at last it settled down and Kirkergard breathed a sigh of relief. He even laughed a little. He could sense that SummonRatticus was going to become his new favorite spell.

Halfway back to the village he thought he heard a tiny voice telling him to shove a brown bug up his dry pee hole but that might have just been his imagination. It had been a long day. 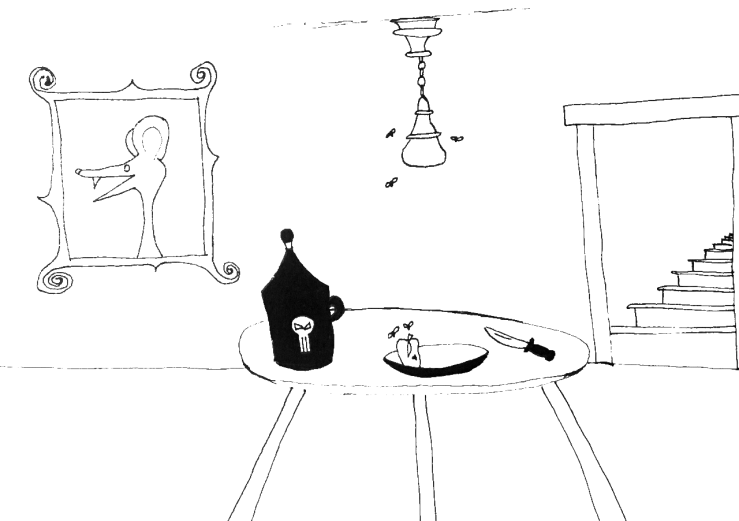